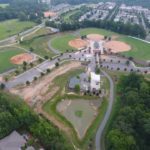 Mecklenburg County Sportsplex is the newest multi-active/passive sports venue in the region. The project consists of three phases and was in planning for more than 10 years. J.D. Goodrum had the distinguished pleasure of constructing the $17 million-dollar second phase and the recently completed $1 million-dollar third phase. The intention of the master plan was to maximize the complex while respecting the environmentally sensitive site, including constraints that restricted the grading of the large playing platforms. Despite these challenges, the design provided a strategic plan for grading the site while ensuring the county had a cost-efficient solution throughout. A site-suitability map carved out the areas that would best fit the desired programming while a grading plan closely reviewed cut-and-fill areas in an effort to save money and promote safety. The second phase ($17 million) was completed in the summer of 2017. A 2,700-seat championship/tournament stadium venue was a main feature of this phase, which includes 11 other lighted and irrigated sports fields, restroom buildings, pavilion, shelters, playgrounds, and 2 miles of paved trails. All fields are designed to support soccer, football, lacrosse and rugby programming on a mix of natural turf and synthetic fields. The previously completed phase one currently has five synthetic fields. The new championship/tournament stadium phase has a natural turf field and supporting field house, with expansion opportunities. The third phase provided additional bleacher seating at the championship field and two additional restrooms. These facilities were added to give the venue a 5000-seat capacity to host tournaments. In addition, the stadium is currently home to the Charlotte Independence, a United Soccer League Team.